Budapest is famed for its nightlife. There are hundreds of amazing venues, bars, cafés open around the clock. The historical downtown area offers plenty of ideas for fun night out, ranging from some of the trendiest dining options and galleries to the hottest pop/rock/electro events. The beautiful historic setting, spas and theatres mixed with a youthful vibe give you a truly unforgettable study abroad experience. 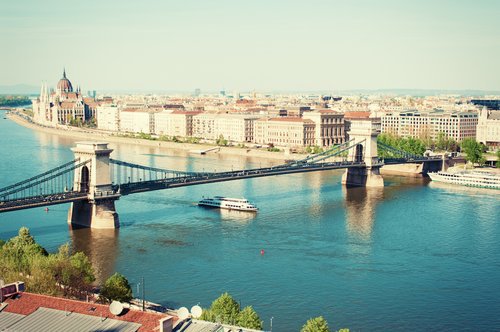 The Chain Bridge (Lánchíd) is probably the most famous sight of Budapest. It was opened in 1849 as the first permanent bridge across the Danube; later - during the first and after the Second World War - had to be rebuilt. At night countless bulbs illuminate it. Children are told that in cold weather the bridge is pulled into the Buda-side tunnel. Currently under construction. 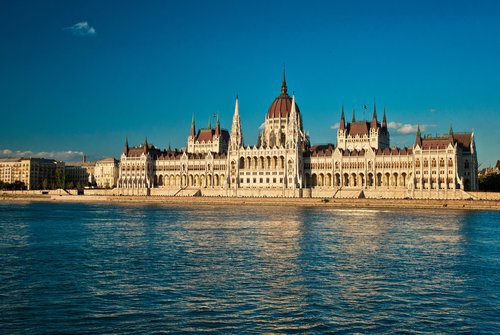 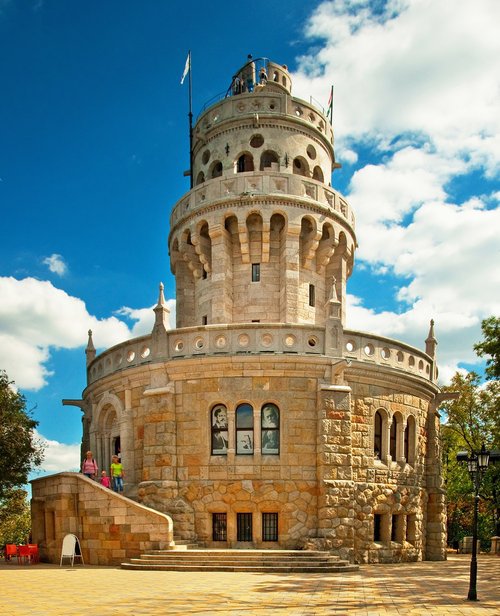 Make a trip by the cog-wheel railway, whose first line was put to operation in 1874, to Széchenyi Hill (439 m). The TV Tower is located on top of the hill with the Children's Railway running all along the Buda Hills. Normafa offers a splendid walk with a wonderful panorama of Budapest. 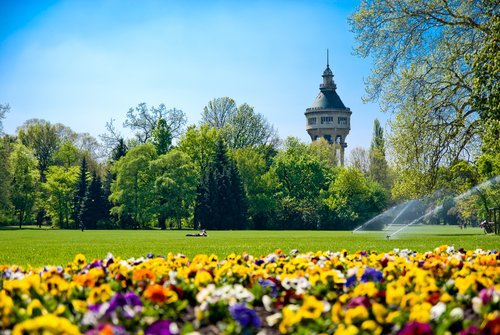 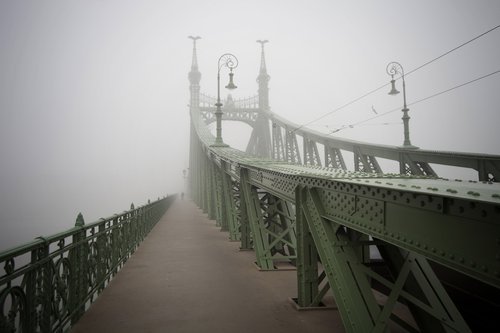 Budapest is famous for its bridges which connect Buda on the western bank with Pest on the eastern bank, over the river Danube. The main bridges in the city centre from north to south are the brand new Megyeri Híd, the Árpád and Margit híd (Margaret Bridge) at either end of Margaret Island, the famous stone Lánchíd (Chain Bridge), built by the well-known Hungarian statesman, István Széchenyi, the white Erzsébet híd (Elizabeth Bridge), the forest green Szabadság híd (Liberty Bridge) and the most southern Lágymányosi híd. 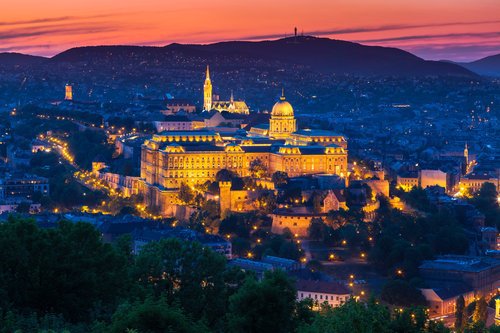 Buda Castle was the residence of the Hungarian kings for about 700 years. Nowadays the baroque building houses some important art collections and museums. It has been destroyed and reconstructed many times over the centuries. 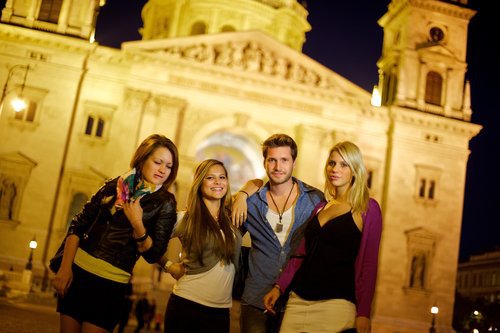 The Basilica (Szent István Bazilika) was completed in 1905 and is the largest church in Budapest. The dome is 96 m high and has a viewing platform around the cupola which offers great views of the city. 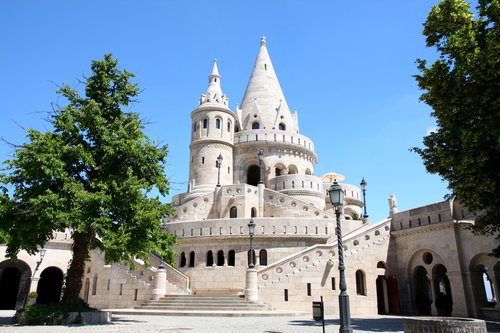 The neo-Romanesque style Fisherman's Bastion (Halászbástya) offers panoramic views of Pest –, especially of the Parliament. It was built between 1890 and 1905 and includes seven turrets and a labyrinth of tunnels and cellars. 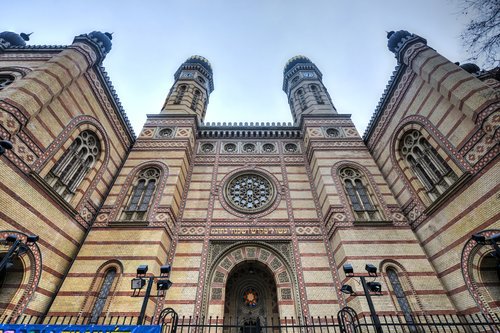 The Budapest Synagogue (Zsinagóga) is the world's second-largest Synagogue. It was built between 1854 - 1859 and has seats for 3000 worshippers. 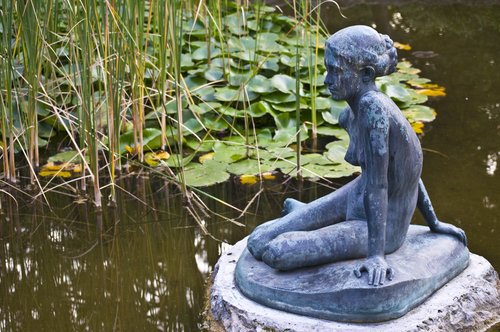 Margaret Island (Margitsziget) is the perfect area for relaxing walks among gardens and ancient trees. There are also some historical monuments, such as the ruins of two 13th century churches, as well as the famous water tower and Japanese Garden. Last but not least, the island offers pleasant views across the Danube to Pest and Buda. 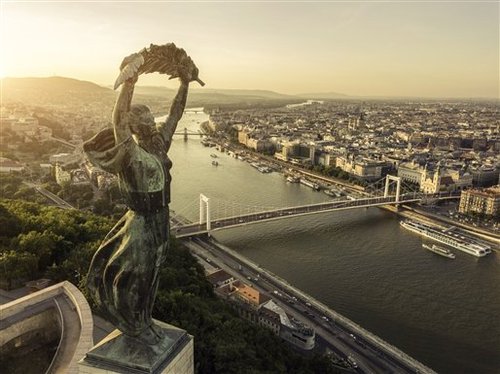 Gellért Hill, topped by the 46-metre high Statue of Liberty, is 236 m above sea level and offers a beautiful panorama of the city and the Danube. In 1854 the Austrians built a fortress, Citadella, on the top. On its side, the statue of Bishop Gellért looks down on the city centre from above a magnificent waterfall. 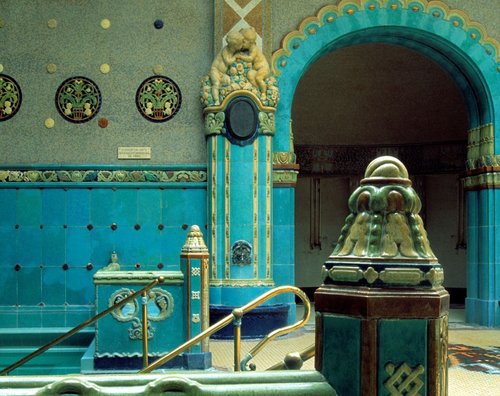 The Art Nouveau building was constructed between 1916 and 1918 and is shared by the 4-star hotel and the famous Spa. It houses an indoor and outdoor swimming pool and Turkish thermal baths. 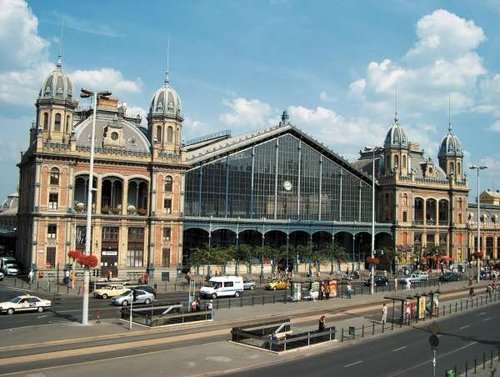 The amazing building of the Western Railway Station (Nyugati Pályaudvar) was built between 1874 and 1877 by the Eiffel Paris Company. It is a typical example of the complex ironwork of Eiffel. The beautiful old restaurant on the right side of the main entrance now houses a McDonalds- it is said to be the finest setting of any fast food restaurant. 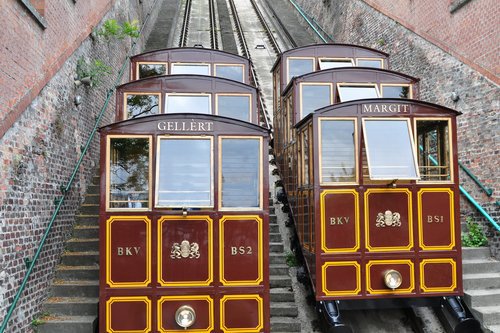 The Buda Castle on Castle Hill can be reached in less than 1 minute by the quiet Funicular (Sikló). The lower terminus is at Clark Ádám tér near the Chain Bridge. It was originally opened in 1870, wrecked in the Second World War and completely rebuilt in 1986.