We have special features, videos, updates and news for you. 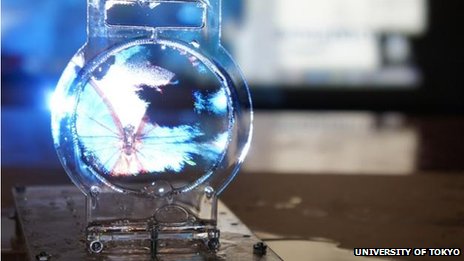 Viewers may soon be able to watch films on soap bubbles - after researchers developed a technology to project images on a screen made of soap film.

An international team produced a display that uses ultrasonic sound waves to alter film's properties and create either a flat or a 3D image.

The bubble mixture is more complex than the one sold in stores for children, but soap is still the main ingredient.

The team says the display is the world's thinnest transparent screen.

"It is common knowledge that the surface of soap bubble is a micro membrane. It allows light to pass through and displays the colour on its structure," the lead researcher, Yoichi Ochiai from the University of Tokyo.

"We developed an ultra-thin and flexible BRDF [bidirectional reflectance distribution function, a four-dimensional function defining how light is reflected at an opaque surface] screen using the mixture of two colloidal liquids."

Although traditional screens are opaque, the display created by Dr Ochiai and his colleagues Keisuke Toyoshima from the University of Tsukuba in Japan and Alexis Oyama from the Carnegie Mellon University in the US, varies in transparency and reflectance.