Viktória Minya, our former student is an internationally acknowledged perfumer and the creator of the first Hungarian luxury perfume brand.

How did you choose to come and study at IBS?

Actually there is not much romantic about it. At that point I was not really clear about what I would like to do. I have always been interested in all kind of arts but my parents did not really thought that one could make a living from them. Studying in English was something that really appealed to me. There was not really any another opportunity that I liked this much, and of course a British degree was also attractive. Looking back, I think the attitude of IBS teaching and learning was really interesting.

I was there for the first two years only, the third year I spent in placement and the fourth year I went to Paris to finish the university at a famous French business school, ESSEC via the Erasmus Program. After the Erasmus experience I went back to Budapest to complete my studies at IBS. The skills that I learnt at IBS were very helpful, as well as speaking a very fluent and almost a bilingual level of English. I speak French as well but I would not survive in this milieu without English. Most of the time when I am in contact with international clients I need to speak English.

Did you choose France consciously, with the thought that you would probably work there in a traditionally French type of industry?

Well, when I heard about the Erasmus program, my first choice was Vienna but it did not work. At that time I spoke rather good German, so I really wanted to go there but I was not accepted. As in the third year I studied French, my first choice became France and of course Paris. It has been almost 12 years that I live in France.

There was a time when you were more well-known internationally than in Hungary.

Yes, and I think this is still more or less the case, and that is very much ok for me. 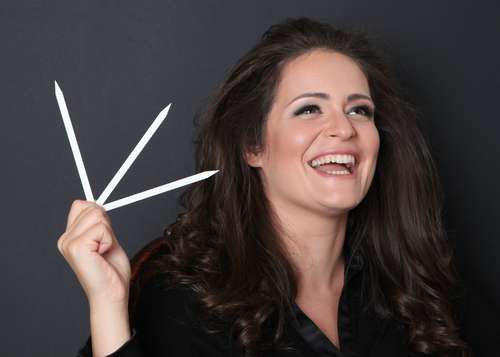 Have you been keeping contact with Hungary throughout these years?

Yes, I have all my family in Hungary. I often go home to visit them, but I am also invited a lot to Hungary for giving inspirational speeches, interactive perfumed shows, even unique team-buildings or just to attend radio and tv interviews.

How do you actually work when you create a new scent or a fragrance?

There are three types of creation jobs that Parfums Viktoria Minya is dealing with. One is when I am working on scents for my own line, Hedonist. Then there is when I am working for other companies who order a scent from us. And there is the private perfume creation when the customer orders a product. All these have different methods. Let’s say another company orders something from us. They have an inspiration of what they want to communicate. They are giving me a lot of details, how they imagine the scent, if it is for male or female, to which country it would go, to which age group. They would tell me sometimes also what ingredients they want or what they absolutely do not want in the perfume. Based on these I write up a formula, then I would give it to my assistant she would prepare it with the help of a high precision balance, and then we are going for probably a hundred or a thousand trials for weeks and months, we smell and evaluate them together and then we would change certain elements till the desired effect is obtained. 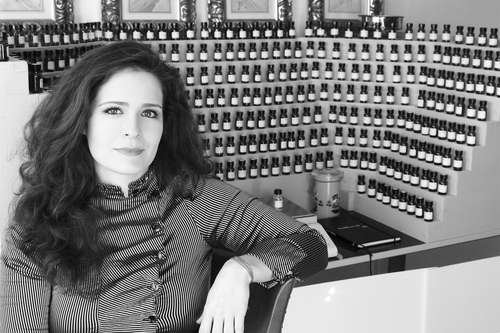 How did you work out your brand? What were the major points of building up your brand?

I feel I was really lucky at the start, my brand became rather quickly internationally known! I spent a lot of time with all the creation part. I would spend a lot of time finding the perfect name! The design was done by Miklós Kiss. Everything went very slow, and I remember being frustrated with that, but eventually I spent a huge time in all details, and I can say that it was worth it. When the product was ready, I had interest from all over the world, a Beverly-Hills based cult fragrance shop started to carry my brand, and it became one of their bestseller in no time!

Although perfumes are generally associated with women, is the world of a professional perfumer a women’s or a men’s world?

Traditionally speaking it would be a men’s world, a lot of men are involved in this industry. During centuries, it would be the father who shared his knowledge with his son, and so on. But I think during the last decades this situation started to change. Women’s different sensitivity added a new aspect to the creation. And now it is quite common to have female perfumers. But things are changing slowly, it is still a bit of a men’s world.

What are your plans, where would you like to develop your career, your products?

With are opening more and more towards the Middle East, we are going to work together with a luxury mall in Dubai to develop an exclusive line for them.

You have been following your passion and you became successful in your profession and in business as well.  What would be your message to those, IBS students among them, who are before their career choice?

A lot of people say that if you are starting to pay your rent from the money you earn from your passion it is not going to be your passion any more. And there is some truth in it, I have to admit, the creation process loses from its freedom once you are working for others and for deadlines, for example. But doing every day what you really love is never a bad idea.

How do you feel about your present situation when you are a rather worldwide acknowledged, famous perfumer? Do you like this situation, how do you deal with it?

It is very pleasant, of course. It did not get to the point when it would disturb my personal life or privacy. So, I do not have any problem with it, I enjoy it. It is true that I have more and more requests that I cannot satisfy or even answer at this point, and I remember at the beginning, I answered and would never say no to any requests – I am realizing that I simply cannot do that anymore.